My son Alex is getting married in a couple of weeks to an incredibly lovely girl, and they’ve asked to have the reception in our backyard. The problem is … our backyard isn’t near as lovely as the young woman Alex is marrying.

Let me (partially) correct that — HALF of the backyard is great. The other half is a barren wasteland of tumbleweeds, dirt, rocks, and a trampoline that’s seen better days. Yes, the barren portion is in the back corner of the yard, but it’s still painfully visible no matter what. Someday, when I win the lottery or happen to find a hundred grand lying on the sidewalk, we’re going to turn the barren wasteland into a swimming pool, sport court, and all-out party zone. But for now, it remains a barren wasteland. 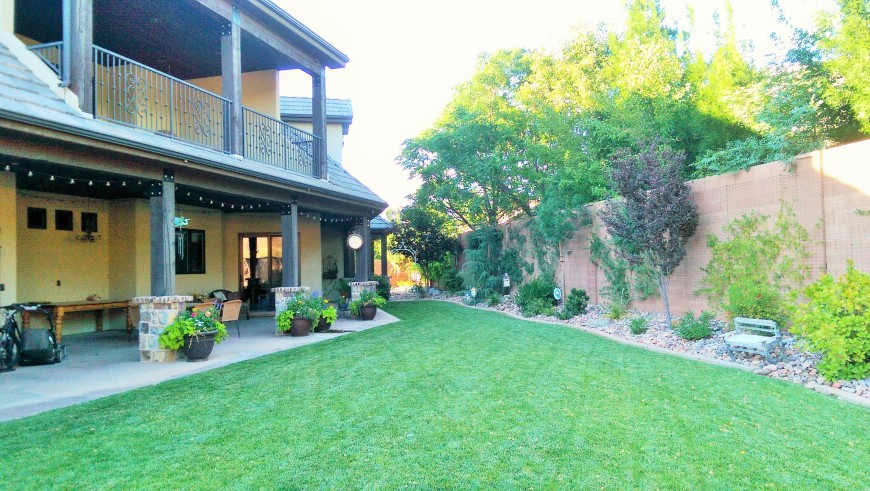 The finished part of the backyard 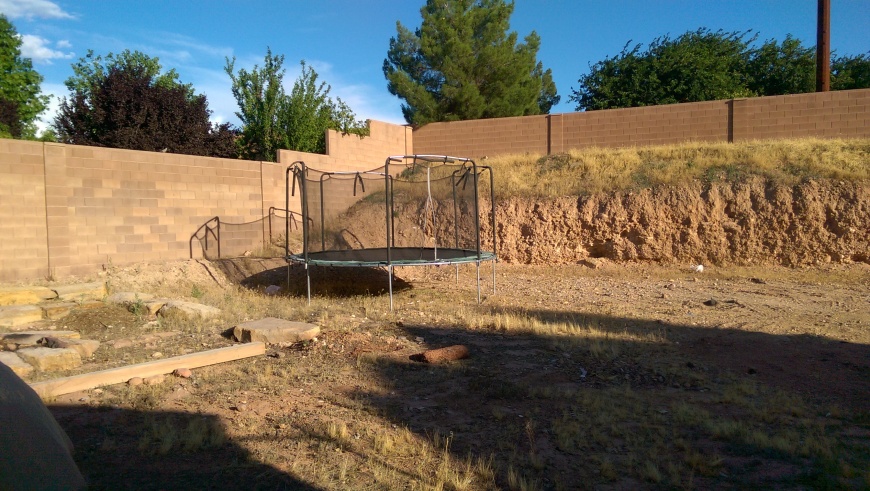 The barren back corner of the yard. Lovely for a wedding reception, right? 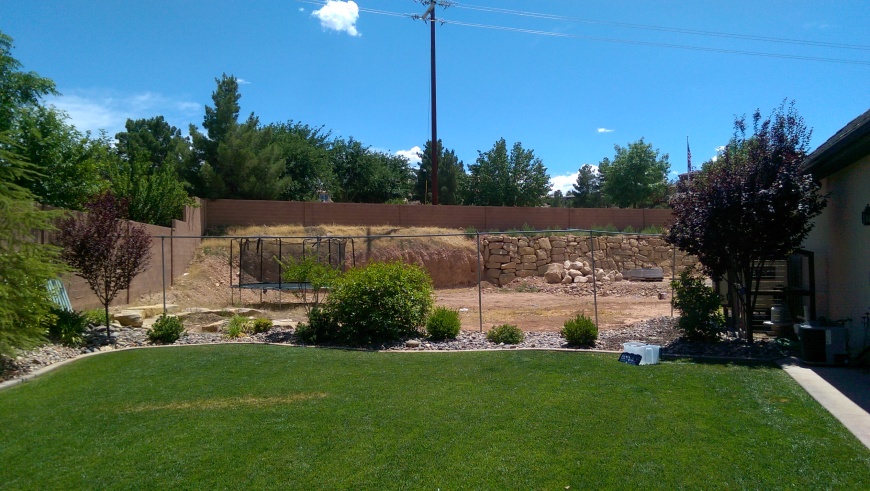 Where the loveliness ends and the wasteland begins

So  . . . what to do?? I racked my brain for weeks trying to figure out how to hide this ugly part of the backyard, without having to panhandle in order to finish the property. I finally came up with a vision for a burlap screen backdrop wall that I thought would be fantastic, but of course, my dear hubby wasn’t sure about. Mainly because it required him to do some work. But guess what? Tough luck. Work you will, young Jedi.

By the way, you could use ANY type of fabric for this, based on the event and color-scheme. Basic canvas would be another neutral option, or you could even use a colorful satin if you wanted. We opted for burlap since the wedding décor was already going to incorporate burlap and other natural elements.

My original thought was to create a structure that would stretch across the entire 60-foot wide space, separating where the landscape ends and the dirt lot begins. I wanted it to be 10 feet tall, gathered, and on a PVC pipe structure that would all fit together with basic PVC joint pieces. My husband Scott said that was fine, but he’d rather build it out of metal. Because basically, PVC pipe wasn’t manly enough. He really only likes projects that require metal, duct tape, baling wire, and other manly stuff like that. Unfortunately, metal was going to be pricey, so he went to see a guy he knows who sells scrap metal. Turns out that the guy offered to let us borrow the pieces of metal pipe we needed, so it didn’t cost us a thing for the pipe.

I went online and started looking for large quantities of burlap. I found that, as usual, the more you buy, the lower the price per yard. I was thrilled to find that I could purchase 100 yards of Burlap on eBay for about $200, including free shipping. The roll is 5 feet wide, and yes, long enough to run the entire length of a football field. I couldn’t believe how huge and heavy the roll was when it arrived, I could barely move it! It was like trying to wrestle a telephone pole. Not that I’ve ever done that, but I can only imagine it’s probably pretty similar.

It was time to start construction of the wall. Here are the steps we took to put it all together:

And that is how we are hiding the wasteland for the upcoming wedding reception! I’ll be sure to post photos of the big event soon.

And I didn’t bother to mention that we made sure to turn the burlap structure at the end in order to keep the luxury chicken coop in the open, visible area . . . because what’s a classy wedding reception without chickens, right?!  🙂